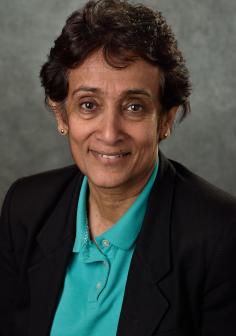 Lalita Udpa, Professor of Electrical and Computer Engineering, is named a University Distinguished Professor, one of the highest honors to be bestowed on a faculty member by the university. Lalita was one of ten MSU Professors that were awarded this professorship in recognition of their achievements in the classroom, laboratory and the community.

Lalita is an internationally recognized leader in the multidisciplinary area of electromagnetic nondestructive evaluation (NDE). With over 350 journal articles, her contributions in NDE have resulted in over 50 Masters and 32 Ph.D. students, who have all been extremely successful in their professions in industry, national laboratories and Academia. For her work on NDE inverse problems, she was elevated to the Fellow of IEEE in 2006. She is also a Fellow of the American Society of Nondestructive Testing (ASNT), a Fellow of Indian Society of Nondestructive Testing and a member of NDE Academia International.  Lalita is a recipient of the Withrow distinguished Senior Researcher Award, the Beal outstanding faculty Award, the Ralph Smuckler award for contributions to international programs, and the ASNT award for advancement of women in NDE. She served for over 10 years as an Associate editor of Materials Evaluation and is on the Editorial Board of Research Journal for NDE and is also currently an Editor of IEEE Transactions on Magnetics.