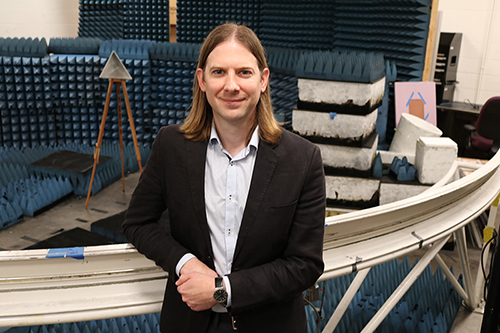 In 2017, he won a $400,000 DARPA Young Faculty Award (YFA) to create technologies enabling separate, small wireless systems to collaborate as a single system. Rather than redesigning new and larger systems when performance increases are needed, Nanzer said adding small and cheap nodes to the distributed system will reduce both costs and development time.

“The aim is to develop methods for precise coordination between multiple nodes and explore the new capabilities enabled by coherent distributed arrays,” he explained.

MSU Foundation Professor and ECE Chair John Papapolymerou said the award is an acknowledgment of Nanzer’s potential to expedite the capabilities of wireless and remote sensing applications.

“Jeff’s work is significantly advancing the state-of-the art in modern radar and wireless communication systems and will enable a new generation of such systems with unprecedented capabilities,” Papapolymerou said. “His work will not only benefit our armed forces but also people’s everyday lives. This is a great recognition of his high quality and groundbreaking work, and a great honor for him and our department.”

Nanzer is a member of the Institute of Electrical and Electronics Engineers (IEEE) Antennas and Propagation Standards Committee, the AP-S Education Committee, and the USNC/URSI Commission B. He was a founding member and the first treasurer of the IEEE APS/MTT-S Central Texas chapter.

In addition to his DARPA awards, he received the 2019 Outstanding Young Engineer Award from the IEEE Microwave Theory and Techniques Society, the NSF CAREER Award in 2018, and the JHU/APL Outstanding Professional Book Award in 2012.

DARPA is an agency of the U.S. Department of Defense responsible for the development of emerging technologies. DARPA’s YFA program helps to establish and sustain groups of young scientists motivated to pursue high-risk, high-reward research by pairing them with DARPA program managers.