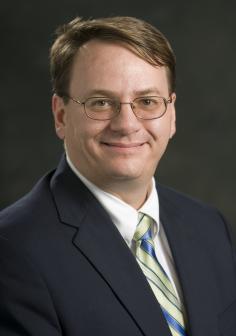 Leo Kempel, dean of the MSU College of Engineering, was named the Dennis P. Nyquist Endowed Professor in Electromagnetics. Congratulations!

Leo Kempel received the B.S.E.E. degree from the University of Cincinnati, Cincinnati, OH, USA, in 1989, and the M.S.E.E. and Ph.D. degrees from the University of Michigan, Ann Arbor, MI, USA, in 1990 and 1994, respectively. After a brief Post-Doctoral appointment with the University of Michigan, he joined Mission Research Corporation in 1994 as a Senior Research Engineer. He served as an IPA with the Sensors Directorate, Air Force Research Laboratory, from 2004 to 2005 and 2006 to 2008. He was the Inaugural Director of the High Performance Computing Center, Michigan State University. He was the First Associate Dean for Special Initiatives in the College of Engineering, Michigan State University from 2006 to 2008 and served as the Associate Dean for Research from 2008 to 2013. From March 2013 to June 2014, he served as Acting Dean of the College of Engineering, Michigan State University. He is now the ninth Dean of Engineering at Michigan State University. He co-authored the book The Finite Element Method for Electromagnetics (IEEE Press, 2002). His research interests include computational electromagnetics, conformal antennas, microwave/millimeter wave materials, mixed-signal electromagnetic interference techniques, and measurement techniques.,Dr. Kempel served as the Technical Chairperson for the 2001 Applied Computational Electromagnetics Society (ACES) Conference and Technical Co-chair for the Finite Element Workshop held in Chios, Greece, in 2002. He was a member of the Administrative Committee, Antennas and Propagation Society and ACES Board of Directors. He was appointed to the US Air Force Scientific Advisory Board in October 2011. He served as an Associate Editor for the IEEE TRANSACTIONS ON ANTENNAS AND PROPAGATION. He was the Fellow Evaluation Committee Chairperson for the IEEE antennas and propagation society and now serves on the IEEE Fellow Board. He is an Active Reviewer for several IEEE publications as well as JEWA and Radio Science. He is a member of Tau Beta Pi, Eta Kappa Nu, and Commission B of URSI. He is a Fellow of the Applied Computational Electromagnetics Society (ACES). He was the recipient of the CAREER award by the National Science Foundation, the Teacher–Scholar Award by Michigan State University in 2002, and the MSU College of Engineering’s Withrow Distinguished Scholar (Junior Faculty) Award in 2001.